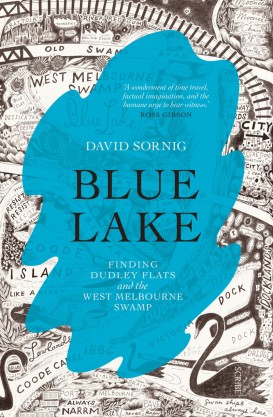 ‘A scrubby sludge of lowland seeping through the centuries; three woebegone characters born two World Wars ago: everything nondescript and forgotten. Starting with these apparent dregs, David Sornig confects a wonderment of time travel, factual imagination, and the humane urge to bear witness.’ ROSS GIBSON.

Blue Lake, examines how the 8km-square zone to the west of central Melbourne became the city’s blind spot. Once a fertile wetland with a large blue saltwater lagoon, it passed through various incarnations: from boneyards and rubbish tips; through the Depression-era Dudley Flats shanty town; to the modern-day docks. Through it all, one thing that has persisted is its uncanny, liminal quality.

As well as being a social history and a psychogeographic contemplation, Blue Lake is a biography of three specific characters: Elsie Williams, a Bendigo-born singer of Afro-Caribbean origin; Jack Peacock, the king of Dudley Flats’ tip-scavenging economy; and Lauder Rogge, a German hermit who lived for decades with sixty dogs on a stranded ship. By charting the rises and falls in their individual fortunes, Blue Lake reveals much about the race and class divides of their times and explores questions about those strange and singular places in the urban fabric where chaos is difficult to contain.

Blue Lake exposes cracks in the colonial mythology of the ordered vision of progressive, urban Melbourne — a place where identities, both personal and public, have never quite been resolved. In doing so, it encourages readers to look harder at the places they live in — at the streets they walk, the buildings they enter, the empty spaces they pass — and to see in them intricate layers of time and history that have been hidden from view.

Blue Lake was adapted for ABC Radio National’s History Listen in 2019 by Miyuki Jokiranta, Cynthia Troup and David Sornig with a score by The Orbweavers.

More about Blue Lake on the Events and Media page

What the reviewers say:

Sornig uses the shifts in time, along with his own personal insights, to contemplate the way a city physically and culturally folds back on its past … Blue Lake is unusually searching; its indirect nature and focus on memory has traces of the elegance of V.S. Naipaul, W.G. Sebald, and Annie Dillard. 4.5 STARS Books+Publishing

… his insights and imaginings into the lives of Elsie, Lauder and Jack are tender and illuminating, and ensure the reader, whether they can locate the Zone itself, can know it through its inhabitants…In the end, Sornig hails the perpetual blind spot that is the Zone as “a site of natural resistance”: Perhaps Australian cities need places where this contradiction can be felt uncomfortably, uncannily, through the feet. Zones with their own puzzling and unresolved consciousness that, like this story, teeter uncertainly between history and myth. The Saturday Paper

Sornig is a precise writer, sometimes lyrical and sometimes direct, with a strong style that houses his many diverse methods of understanding a place he sometimes calls “the Zone”. Ronnie Scott, Weekend Australian ($)

Imaginatively constructed and with erudite first-person guidance, this is the kind of riveting non-fiction that deserves the term ‘creative’. Anthony Lynch, ABR’s ‘Books of the Year 2018’

[A] sprawling, era-traversing expose … The true star of Sornig’s sordid story of neglect, squalor and life on the margins is the setting itself. Blue Lake is an attempt to discern the history of a place so bereft of understanding it defies identification. Liam Fallon, Right Now

Blue Lake may be about West Melbourne, but armchair travellers elsewhere who are familiar with the pyscho-geographic urban writing of London’s Iain Sinclair will also appreciate David Sornig’s lyrical prose and eye for the forgotten places in our cities. JourneyOnline, The Uniting Church of Queensland